The many challenges presented by 2020 have been undeniably brutal and far-reaching. As the news readers like to remind us (if you can still stomach the news, that is!) – the events of the first year of this new decade have been ‘unprecedented’. High on the list of the many stark reminders that Coronavirus has delivered, is the fact that if we don’t come together and act now to reverse climate change and restore nature, this won’t be the last time a virus wreaks havoc on the world’s population.

The state of play

Back in 2019, the UN released their landmark Global Assessment Report on Biodiversity and Ecosystem Services. The report was the first comprehensive look in 15 years at the state of Earth’s biodiversity. It combined findings compiled by 145 experts from 50 countries, examining scientific, government, and, for the first time, local and indigenous data. The results were indisputable – human activity is behind nature’s decline and the window of opportunity to protect our supply of food, clean air and water and to prevent the extinction of more than one million species, is closing fast.

Furthermore, in September 2020 The Fifth Global Biodiversity Outlook Report, published by the United Nations Convention on Biological Diversity, revealed that the world is failing in its efforts to stop the destruction of wildlife and life-sustaining eco-systems. The report revealed that none of the Aichi Biodiversity Targets set back in 2010 at the start of the UN’s Decade on Biodiversity, have been met by the participating nations. The targets were established to address climate change, halt the loss of nature, and to protect the world’s health and food security. Of the 20 targets, only six have been deemed, ‘partially met.’

Despite targets not being met, as a result of increased international awareness and scientific understanding, and of course, the arrival of COVID-19, the world might finally have received the wake-up call needed to recognise just how fragile our planet is.

Hot on the heels of the release of Biodiversity Outlook Report, in October 2020, political leaders from 64 counties gathered (virtually, of course) at the UN Biodiversity Summit and made the vital pledge to reverse biodiversity loss by protecting 30 percent of land and 30 percent of oceans by 2030.

Let’s hope this time, these nations make good on their promises and that the recently declared, UN Decade on Ecosystem Restoration (2021-2030) yields more significant results.

Hopefully, yes. A study, published in Nature Journal in October 2020, highlights the impact that returning 30 percent of ecosystems to their natural state would have. The study, conducted by 27 researchers from 12 countries, examined a variety of eco-systems to determine priority areas, and found that by protecting 30 percent of those areas, alongside protecting eco-systems that are still in their natural form, we could prevent more than 70 percent of predicted extinctions and soak up more than 465 billion tons of carbon dioxide. This is the equivalent of reducing all the carbon that human behaviour has built up in the atmosphere over the last two centuries by 49 percent!

Speaking of the report’s findings, lead author, Bernardo Strassburg commented: “We show that if we’re smarter about where we restore nature, we can tick the climate, biodiversity and budget boxes on the world’s urgent to-do list.”

In previous years, emphasis has been placed on reforestation with the idea being that the more trees planted, the better. However, as this report and many others now show, the most profound effects come from returning an ecosystem to its original state by reintroducing native flora and fauna – a process known as ‘rewilding’. This is what we’re focusing our attentions on here at Eagle’s Nest. Here is a rundown of three of the main advantages of rewilding…

Since the end of World War II, 80 percent of Costa Rica’s forests have disappeared and since the 1950’s, around 60 percent of the country’s natural habitats have been cleared to make room for cattle ranching – a problem that was exacerbated in the 1960s when the USA offered Costa Rican cattle ranchers millions of dollars in loans to produce beef. As we now know, cattle farming is one of the major causes of climate change – not only does it involve flattening large areas of land, decimating untold species and displacing native animals, but the waste produced and chemicals used pollute waterways. Plus, the methane from the cattle increases the planet’s temperature. While much of the world’s focus remains on the effects of power generation and fossil fuels (and rightly so) numerous leading-scientists, including Nobel-Prize winning scientist, Steven Chu have found that ‘agriculture and land-use generates more greenhouse gas emissions that power generation.’

By rewilding areas that were previously forests, we recreate the world’s natural ‘carbon sinks’, which play a vital role in removing carbon dioxide from the atmosphere. Through photosynthesis, trees and plants absorb carbon into their leaves, soil and wood, filtering it out of the atmosphere and into the ecosystem of the forest, where it belongs. 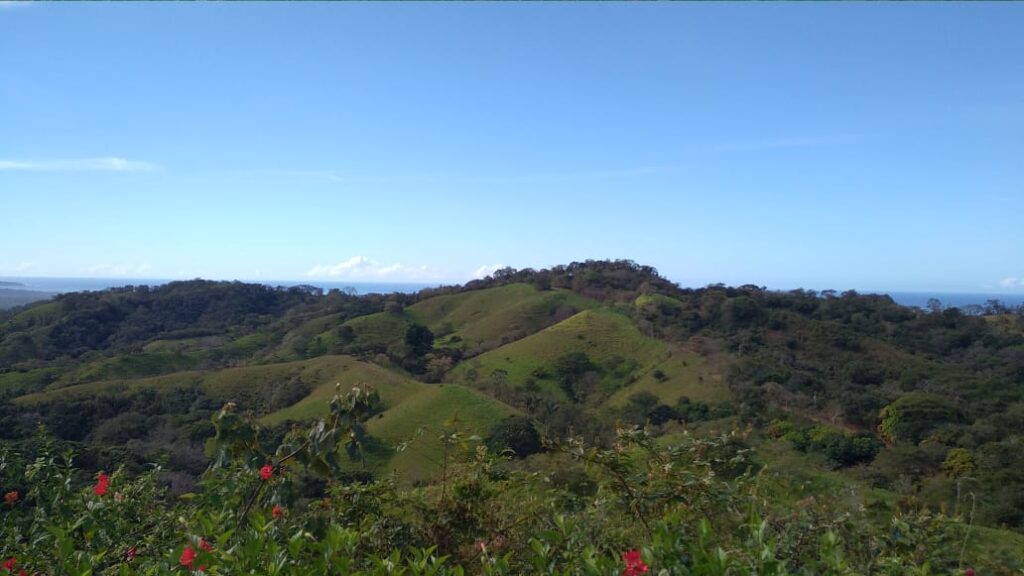 Deforestation in Costa Rica has contributed to an increase in the likelihood of natural disasters, particularly flooding, drought and desertification, which happens as a result of increased temperatures and overexploitation of the soil. Our region, Guanacaste, is a key location for livestock production and is therefore particularly prone to drought due to rising temperatures and shifting rainfall conditions.

Rewilding the land will restore natural rainfall patterns. It will also prevent flooding, as the canopy protects the forest floor and plant roots draw water deep underground. In fact, in forests, rainwater is absorbed at 67 times the rate that it is absorbed into grass-covered soil. Additionally, trees prevent soil washing into waterways, causing landslides and erosion of riverbanks, which leads to flooding.

Deforestation has destroyed the natural habitats of many of Costa Rica’s incredible animal, insect, bird and flora population. When species are destroyed or misplaced, not only do they become at risk of extinction, but for those that do survive, the whole food chain is thrown off. When animals are forced to change their behavioural patterns, other species suffer too. For example, even a slight change in the behaviour of animals at the top of the food chain can alter the ecosystem, the landscape and even the composition of the soil and the atmosphere.

Rewilding ensures native species have a place to live that offers the optimum conditions for them to survive and thrive. Furthermore, bringing native species back to their true habitat restores the balance required for the eco-system to regenerate and operate in the way that it is designed to. The way that Mother Earth intended it.

To learn more about our efforts rewilding Eagle’s Nest land and beyond, or to discover how we can help your business to offset your carbon footprint via our rewilding programme, drop us a line.